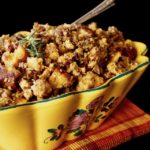 This Gluten-Free Cornbread Stuffing recipe for Thanksgiving is a family favorite. Made with caramelized onions, mushrooms and pecans, this stuffing is on a level of its own.

My mom used to start cooking her Thanksgiving stuffing at least a week before the holiday. The aromas of caramelized onions and fresh herbs would drift through our house for days.

The whole week, I could always smell Thanksgiving as I'd walk down our block on my way home from school.

The cooking, tasting, and adjusting didn't end until after the Thanksgiving feast.

My mom would add something to her Thanksgiving stuffing daily for the whole week! After each new ingredient, we would all taste and say how delicious it was.

Those positive reviews, however, did not stop my mom from making subtle changes until the very last moment. And somehow it just got better and better.

Time marches on, though, and now I am the main cook for the family's Thanksgiving feast. And I make my own stuffing (and admittedly, I don't spend a full week on my version).

And I make gluten-free stuffing because my son can't eat wheat.

Gluten-Free Stuffing Made with Cornbread

This is a family favorite.

And each time I begin this recipe, when I sauté the onions and add the fresh herbs, the oh-so-amazing aroma brings me right back to every other Thanksgiving.

What's in this recipe?

Just imagine a combination of these ingredients!

Can you make it ahead?

You can make this Gluten-Free Cornbread Stuffing ahead.

You can do everything up to mixing the toasted cornbread and stock with the onion mixture. About an hour before serving, mix everything together and heat.

I hope you love this as much as my family and I do.

What else is on the Thanksgiving menu?

Valentina K. Wein
This Cornbread Stuffing is a family favorite. Made with caramelized onions, mushrooms and pecans, it bursts with flavor.*Note that the prep time doesn't include making the cornbread. The recipe I use is here, and should be made a day ahead.
5 from 6 votes
Print
Prep Time 5 mins
Cook Time 40 mins
Total Time 45 mins
Course Side Dish
Cuisine American
Servings 8
Calories 338 kcal

Calorie count is only an estimate.
Keywords great for Thanksgiving, gluten-free Thanksgiving recipes
Have you tried this recipe?I'd love to see it on Instagram! Tag me at @cookingontheweekends or leave a comment & rating below.

Hi, I'm Valentina, certified chef, owner, recipe developer and photographer at Cooking on the Weekends. I'm also a mom of two boys and a Los Angeleno. I use seasonal whole foods to create unique and comforting recipes for casual entertaining.